Today’s drive takes us down the eastern coast of New Brunswick and then across the bridge to Prince Edward Island and its principal city Charlottetown.  We take the tourist route through a pretty little fishing villages followed by the national park and its succession of bridges crossing rivers and inlets.  All postcard perfect except Dave was on a mission so no chance to get any happy snaps along the way.  We are seeing it on the best day of this summer – must be pretty bleak and miserable in winter though.

We stop for fuel and coffee mid-morning and have to find a way through the double line of cars and pick-ups stretching back about a hundred metres from the drive thru at Tim Hortons.  Must be very good coffee to justify all those carbon emissions – why can’t they park their cars and walk a few steps to the counter??  A Cobra replica rumbles by just as I’m taking the picture.

Then it’s across the long bridge to Prince Edward Island.  The locals claim it is the longest bridge in the world at over 10 km across the water but no-one has told them there is a much longer bridge in China now. 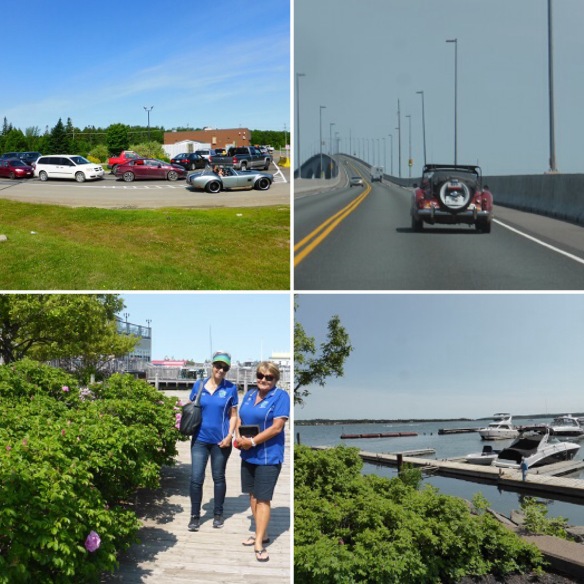 We reach our overnight destination of Charlottetown about midday and head downtown to checkout where the best lobster is served.  Lobster rolls hit the spot and then it’s off for a walk around the shoreline – no traces of the massive ship building industry of the 19th century now, just beautiful parks and marinas.  Here we learn the significance of the town on Canadian history.  In 1864, the Charlottetown Convention was held.  At first it was to be just a meeting of the three eastern provinces – Prince Edward Island, Novia Scotia and New Brunswick instigated by Great Britain’s concerns not only by the threat of the post-civil war USA taking over but also the cost blowout of recent rail projects.  At the last minute, Canada invited itself to the meeting and put a convincing argument to the three British colonies to join with Canada.  It seems the Canadian hospitality was so generous that the provinces were convinced to join “..to produce one of the greatest nations on God’s earth”

Just for something different this evening, we see a performance of Mamma Mia in the Charlottetown Arts Centre.  An excellent production which would have been worthy of a capital city in Australia – how good to see it in a small town of only 45,000 people.