Our last day and we are driving solo to Lima while the rest of the group spend another day in Nazca taking light plane trips over the Nazca Lines.  We are very tempted to join them but we don’t have much information on  the road ahead and want to get to Lima as early as possible to catch up with Simon and Maddy.  A nail-biting moment as we load the car and turn the key to hear a dull clunk as the starter solenoid refuses to engage – again.  Five more times the clunk is repeated before the starter whirrs into life and we get away.  Phew!

We stop in around 20 km at the viewing platform for some of the Nazca Lines closest to the highway – not the same view as the others will have had but at least a feel for the size of the mysterious shapes created in some earlier time.

Then off for the remaining 430 km knowing that we can’t afford to switch the engine off unless we can find a good down slope to get started again.  The road is much slower than we expected, at first winding through desert passes and then through several busy towns including Ica and Pisco – the home of the famous Pisco Sour cocktail.  With around 200 km to go we still hadn’t found anywhere to stop and the road became a 4 lane Auto Piste running parallel with the coast.  At least we could cover some distance quickly but what a lost opportunity.  In any other country you might have expected plenty of exits down to beautiful sandy beaches but this road is lined with never-ending sheds housing battery chickens – hundreds of them, probably producing eggs for export markets all over the Americas.  And the smell!  Wherever there was a gap in the egg farms there were desolate communities living in tiny shacks with no water or electricity.  A tough life for some. 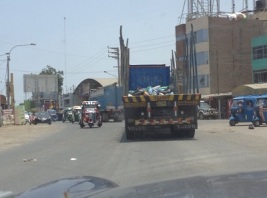 Finally the desert gave way to irrigated green areas and we are in Lima – a sophisticated city of 9 million people.  The Country Club Hotel is a bit of misnomer now.  Built in the 1920s it is a grand hotel right opposite the golf course now smack bang in the middle of the financial and embassy districts. We feel a little under-dressed being welcomed with a glass of champagne among all the beautiful people of Lima while we are dressed in shorts and T-shirt but they probably haven’t just had the adventure we have had. 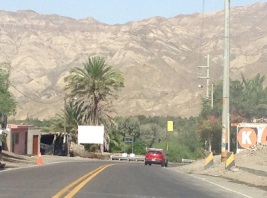 Now for the next adventure.

PS Just heard
from Simon that the starter has been repaired. Once again full of water and mud, probably from all the water crossings on the road from Cusco after the last repair. Lorraine suggested the skid plate may be directing spray from the front wheel straight into the starter. I think she may be right – obviously hanging around engineers far too long, she is starting to think like one!

4 thoughts on “Nazca to Lima”