Another beautiful hotel in a vineyard setting, the Merced del Alto is owned by a business man from Salta who made a large fortune growing sugar cane in the northern part of Argentina.  Now he is busy turning it into a small fortune by running a tourist hotel and winery.  Very pretty and we were sorry we had to leave so early. 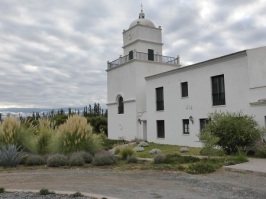 For the run across to Salta, we will drive back on Route 33 giving an opportunity for those who missed out yesterday on the Valley of Coloured Rocks to drive in from the other end and miss all the rough bits.   This group didn’t get too far – as we were leaving the hotel we heard over the UHF that they were still in the town square checking out a serious problem with Casper.  We arrived a few minutes later to find Pete and Ross under the car trying to find out why the rear brake had locked on and more critically, why the complete drivetrain had locked up.  Lots of theories but we all decided it was a job which couldn’t be fixed in the middle of the town square.  A guardian angel arrived in the form of Juan, a local farmer who was showing off his products at the market in the square.  Juan was educated at an English school in Buenos Aires and subsequently run properties in Patagonia before settling in BA.  More recently he moved to Cachi for the better climate and now produces jams for the hotel industry.  He said he didn’t need to show his produce because everything was pre-sold but thought it would be rude to turn down the invitation.  Juan put George in touch with the local restaurant who also operates a flat bed tow truck so a deal was struck that as soon as lunch was over, the car could be trucked to Salta.  It turned out that his tow truck driver was also the waiter so obviously this took priority.

A subtle hint re politeness in South America – this cafe offered a 20% discount to customers taking the trouble to add “Good morning” and “Please” to their order.

With Dave staying behind to make sure Casper was loaded and George would ride in the tow truck to Salta and the other cars checking out the Valley of Coloured Rocks it was just Goldie and Navy Car making the run directly to Salta.  Our first stop was in the middle of the Recta del Tin Tin where there was a tourist stop to learn all about the indigenous cactus plants.  The other tourists were fascinated by our cars and quickly lost interest in the cactus so we had the place to ourselves.

Hmm..  MG Motos – maybe George should have brought his car over here..

Back on Route 33 it was a long climb to 3500m and heavy mist as we started down the tight winding road into the amazing Cuesta del Obispo – a beautiful valley with a series of micro-climates taking us down to 1100m and the road leading into Salta.  Barren and windswept at the top, trees and more substantial vegetation from 2500m and then lush tropical vegetation at the bottom.  Very narrow and unsealed in places with washaways from the heavy rain, we didn’t envy George riding down there in the tow truck.

By 6:30 pm everyone had turned up at the hotel in Salta so there were lots of stories to share at our regular briefing.  Then it was time to hit the music and food scene which Salta is famous for – the Pena precinct just a few blocks from our hotel.  We arrived about 8:30 pm to find the precinct almost deserted, but by 9:30 people started trickling in and when we left around midnight it was really jumping.  We felt like party poopers leaving our table when all locals with small children and babies were just getting into it but somebody has to work…

1 thought on “Cachi to Salta”