Last evening we gave our soulless hotel a miss and went back into town to eat at a cafe Mike had seen on the way in.  It was the first time we had seen anywhere with outside tables and chairs so we settled in as the sun started to go down and chatted to a few people who came over to check out the cars .  Dave was interviewed by a young lady from the local paper who had seen us come in and she later called by and gave him a box of locally made chocolates.  Our waiter was a young chap who seemed to take in the entire order for drinks and meals from our table of 8 without writing anything down – the Argentinian way. We ordered a Sauvignon Blanc and a Malbec but were presented with a Rose.  Tried again and got a little closer before we finally worked out that they didn’t actually have anything on the wine list and he was just checking what we might like instead.  It worked out ok in the end but after most of the meals were delivered he told Lorraine that Tuna salad was off and what would she like instead.  Another half hour passed punctuated by John going inside and reminding him that Lorraine’s meal still hadn’t been delivered.  I had also made sign language through the window whenever he went past and he gave me the thumbs up.  Finally her meal arrived but by this time it was blowing a gale and we realised why outside dining was a bit of a challenge.  We paid the bill including a less than usual tip as an encouragement and as a parting gesture he presented John with a bottle of Chardonnay!

Today we have what looked like a straight forward 420 kms run to Mendoza.  Just one potential hiccup, we decided to take what looked like a paved detour around San Rafael which is a fair sized town.  Sure enough there was a Garmin moment when we were lead down ever more minor tracks until we came to a group of houses.  I asked one of the residents whether the road would take us through to Mendoza to which he replied no, we needed to go back and take another road but my Spanish wasn’t quite good enough to be sure where this was.  Then another chap arrived and said no problem, the track would take us to Mendoza.  Just like one of those stories about asking directions in Ireland.  Being trusting souls we took his advice and headed down the track through the tip to find a fast flowing river blocking our way.  Of course all the locals had a big laugh when we had to turn around and come back.  We were just pleased we had given them something to brighten up their lives and talk about for years. 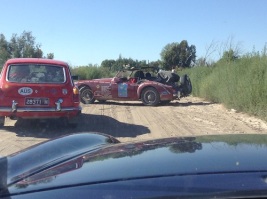 Our lunch stop was in a town where we rejoined route 40 – this also by-passed San Rafael but looked like a pretty rough gravel alternative so we had given it a miss. Everyone heard we were in town and came over for a look.  One guy was particularly interested in the engine in Pete’s car so I asked if he was a mechanic – no he said piloto de carreras, which I took to be a race driver.  I showed him some pics on my phone of Fangio signing the wall of the garage in Albert Park we had come across recently which had been used by many of the Grand Prix drivers in the 1950s.  He was very excited and pointing at me said  ‘Alan Jones’.  He was even more excited when I panned through a few more pics from the garage and found Alan Jones signature – Alan must have been a boy at the time.

2 thoughts on “Malargue to Mendoza”