Hotel accounts resolved we got way after coffee and croissants at the local servo for the short drive to Esquel.  The plan was to get there in time to book tickets for the 2:00 pm departure of the “Old Patagonian Express” .  This title was bestowed by Paul Theroux, one of our favourite travel writers on his trip from Boston to Patagonia.   The local name of the train is “La Trochita” but the new title also now appears in some of the Argentine documentation. 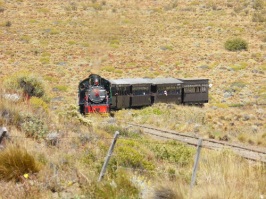 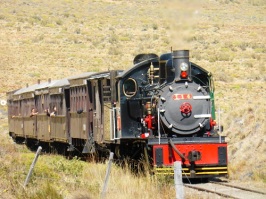 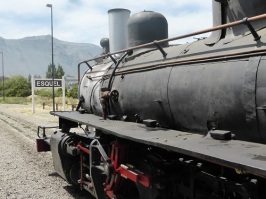 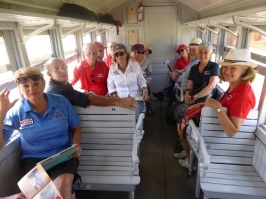 La Trochita runs on a narrow gauge railway running from Ingeneiro Jacobacci in the north down to Esquel.  Construction started in 1922 and completed in 1945 it ran for 402 km, initially just for freight but later as a passenger service taking 15-20 hours connecting with the broad gauge service to Buenos Aires.  Tiny hard seats and rattly windows with the only concession to comfort being a small wood stove in the centre of each carriage.    The locomotives in use today were built by Baldwin in the US.  In 1990, all railway operations were closed in Argentina as an austerity measure but somehow La Trochita survived and today it operates as a tourist service from Esquel to the next town, Nahuel Pan, a round trip of 21 km.  There is a small museum at the Esquel station showing videos of the train in its heyday battling snowdrifts and winds – at some stage the entire train was blown off the tracks by the Patagonian winds but they managed to resurrect it and get it back into service.

Tonight we are staying in a bed and breakfast called Canela with our generous hosts Jorge and Veronica.  A green oasis with beautiful gardens and comfortable rooms on the edge of the Patagonian pampas.  Very welcome after some of the more austere accommodation recently.

1 thought on “Gobernador Costa to Esquel”