Only a short day’s drive back to Rio Gallegos today so we delayed our departure until noon leaving time to visit the local museum dedicated to the indigenous Yamana people.  They arrived around 6000 years ago with their ancestors having made the long migration from Central Asia via the Bering Strait and somehow managed to survive the harshest conditions in Tierra del Fuego – the Land of Fires named by early sailors who observed the fires they burned to keep warm.  The Yamana managed to survive a semi nomadic existence living off mussels, cormorants and the odd beast while wandering around completely naked – apparently this was preferable to wandering around in constantly wet fur clothing.  The one concession to the weather was that they spent a lot of their time squatting so they ended up with baggy skin around their knees and a serious case of pigeon toes.  Not really a good look.  All went well until some well meaning missionaries decided they needed salvation around 1840.  They may have survived the salvation but unfortunately most didn’t survive the introduced diseases so today there is only one direct descendent left – an 84 year old woman named Catalina who still lives in Ushuaia. 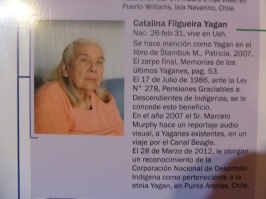 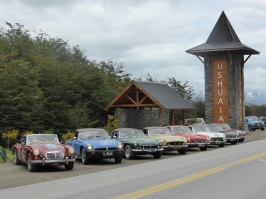 The drive to Rio Grande retraced our steps on the way south so no surprises and a good road all the way.  There is only one town along the way and it is supposed to have two attractions.  The first was easy – La Union Panaderia is reputed to have the best pastries for miles around, in fact the only pastries for miles around and everyone and his dog were there.  The second attraction was a bit of a mystery to everyone.  Tolhuin is supposed to have the southernmost race track in the world but nobody we asked knew anything about it.  A pity, especially for RIP which only last year got to drive around the northernmost race track in Norway. 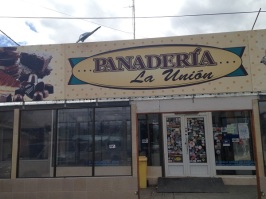 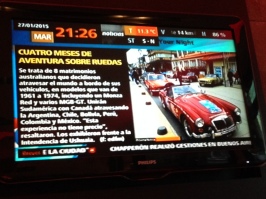 Must have been a quiet news day today because the Patagonia TV channel had a story about the 8 Australian couples who tour the world in their 1961–74 MG cars.  Caused quite an excitement in the Italian restaurant where we were eating this evening when the other customers  made the connection with the MGs parked outside.