Everyone was ready to hit the road at 8 am despite a few bleary faces – some of our rooms were directly above the dance floor where the action started late and went through until after 3 am at a million decibels.  We are learning they like their music VERY LOUD!

No dramas getting out of Valparaiso and we have decided to take the scenic route close to the coast.  Morning tea spots were hard to find so we ended driving through a camp ground to a riverside area where a large crowd quickly gathered and the kids figured out we had a good supply of clip on koalas.  All good until Guy, Laurel’s son who has joined the trip for a few days with his Chilean girlfriend Andrea, manages to lock the keys of his rental JAC in the ignition.  Good move to prevent possible theft by the young kids but it almost defeated us too.  Fortunately the local break-in expert arrived and with the help of a large screwdriver, a piece of wire and a loop of dental floss, the lock was lassoed and pulled up.  Phew!  Have to say the JAC is such a rubbish car some might have been tempted to leave it there.  Chinese cars, buses and trucks from dozens of brands are everywhere on Chilean roads.  The Higer bus we took to pick up the cars from San Antonio  was comfortable enough but it couldn’t get up hills to save itself and had axle whine which would have appalled Roger -“A singing axle is a happy axle”- Gibbs.

For the final leg we took Ruta 5, the Pan American Highway which today is a fairly boring 4 lane tollway.  Good value at around $5 per 100 km and certainly a good way to cover large distances quickly. We have been surprised at the high standard of Chile’s roads – even the secondary roads in this part of the country are better than the equivalent roads in Australia.

Our overnight stop on 10 January is the Tabonko Guest House at the Gillmore Winery where we meet our warm and generous hosts Andreas and Daniella.  They are the owners of the winery which has a history going back around 400 years to the time when the Spanish first settled around Concepcion, now Chile’s second largest city.  Like many
small boutique wineries they are concerned about Chile’s reputation as an exporter of low cost quaffing wines and are concentrating on just two varieties, Cabernet Franc and Carignan.  Granitic soil, dry irrigation and good winemaking techniques make some great food wines which we enjoyed with slow cooked beef and turkey.  We were interested to learn why Chile now mostly grows French grape varieties.  Andreas explained that some Chileans became very wealthy in the 19th century, mainly through exports of phosphates, and developed a taste for everything French, including their architecture and wines. 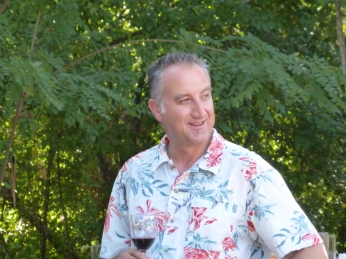 Another beautiful sunny morning and we again have a choice between a boring 5 hours along the tollway or the 8 hour  scenic route.  Not a hard choice, we took Daniella’s recommendation to drive towards Concepcion via the costal route. Lots small fishing villages, with families camping on the beaches enjoying the black sand and modest surf.  Apart from a short section of gravel road, Ruta del Mar must be one of the best coast roads anywhere in the world, right up there with California’s Highway 101 and the Great Ocean Road but with almost no traffic.  The only disappointment is a 70 km/h limit in the interesting bits.  Then back to Ruta 5 for the final 250km to our overnight stop in Temuco. 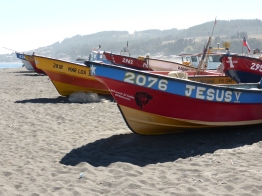 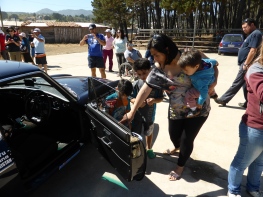 Our hotel was another huge casino, similar to the one in Vina del Mar so we opted to eat out.  Not much open on a Sunday evening so we all ended up at a nearby Italian restaurant.  Pizzas, salads and excellent wine for $40 a couple including a generous tip and we have enough leftover pizza for lunch tomorrow – no wonder travellers say Australia is expensive.

2 thoughts on “Valaparaiso to Temuco”