Our last few days in Melbourne before leaving for a week in New York and then meeting the other adventurers in Chicago.  The plan is to drive the cars across the US and Canada to the easternmost point – St John’s Newfoundland via Louisville Kentucky where we will meet up with MG people from right across the US at their National Meeting. 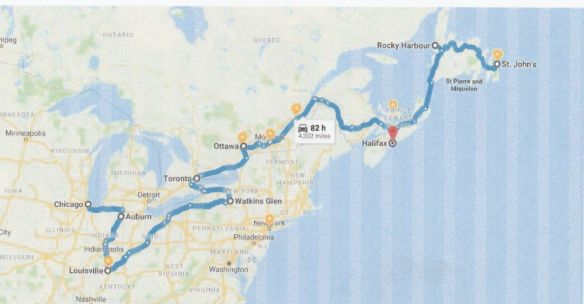 Navy Car has spent the past year stored in a garage in Los Angeles waiting to be fired back to life.  Well that was the plan but of course the battery was flat when Simon turned the key so a new battery did the trick.  Simon managed to find Mal, the Mobile MG Mechanic operating in Los Angeles – a former Pom who is probably making a fortune looking after the hordes of MGs still surviving from what must have been one of the most successful “export or perish” efforts of all time.  Britain was on its knees and broke after WWII but the GIs who had spent their war years on the other side of the ditch had fallen in love with British sports cars.  Jaguars, Austin Healeys, Triumphs and MGs were exported in hundreds of thousands to the US in the 1950s and 1960s.  Then they discovered they were all fitted with Lucas electricals and bought Japanese cars instead.  Oh well, it was good while it lasted.

Simon also discovered Moss Motors just around the corner who also make a fortune selling bits for old cars past their use by date so a new starter motor was top of the list!

After an easy drive up the west coast, Simon and Madelaine have now joined the four other teams in Vancouver and today they are on their way from Banff to Calgary enjoying the grandeur of the Rockies.  Hopefully all plain sailing over the next couple of weeks before we join them in Chicago.